History of the American Barn

Who does not enjoy catching sight of an American red barn as they drive down the road?

The farmer's barn had to be built wisely because invariably it housed his greatest assets. The agricultural building was more important than his own house. Without a way to protect farm animals or crops, early settlers had few ways to survive.

Barns were about common sense, usefulness and economics - not style. 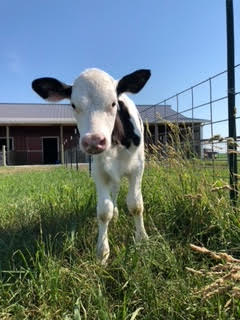 Every new barn, therefore, was a "new and improved" version compared with past efforts - not only in construction materials and techniques, but also in orientation to the sun and prevailing winds, as well as in accessibility and general efficiency.

There were no blueprints for barns. The builder often brought knowledge from his home country and also gained knowledge from neighboring barns in his construction. The characteristic looks that we associate with barns are the result of this natural evolution. Most of what we learned through this natural evolution is still widely employed in the barns of small farms today.

Do you know why most barns are painted red?

Early farmers didn't paint their barns at all.  Why waste money on paint? However, by the late 1700s, farmers began to look for a way to protect their wood barns from the elements. It was a functional need, not a decor decision.

Farmers made their own paint, usually with a mix of skimmed milk, lime, and red iron oxide earth pigments - which had a red tint. This created a plastic like coating that hardened quickly and lasted for years. Linseed oil was subsequently added to the recipe to provide the necessary soaking quality.

Mixing the oxide into the paint protected the wood from mold and moss (which caused decay) and also resulted in a deep red color. It so happens that darker colors also absorb more of the sun's rays and kept buildings warmer in the wintertime. Thus, the American "barn red" was born. 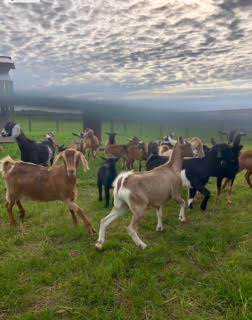 The sound that a goat makes is called bleating and that's how they communicate.  Goat's spine hairs stand up on their back when they feel threatened or aggression. Goats do not have teeth on their upper jaw; they only have bottom teeth. Have you looked into a goat's eyes?  Their pupils are rectangular in shape. This allows them to see everything around them except what is directly behind them. Goats love to head butt.

Chickens have no teeth.  Baby chicks can chirp while still inside of their shells. Once an egg is laid, it takes 21 days for it to hatch. There are about 25 billion chickens in the world!

Rabbits have sharp, strong front teeth for biting tough grasses. A rabbits teeth grow all of their lives so rabbits like to chew on things in order to keep their teeth from getting too long. 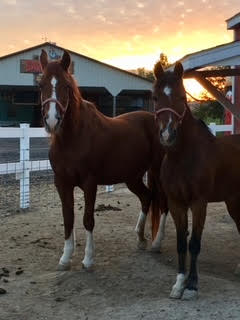 Our resident horses are Chaia and Little Bit.  Chaia is 17 years old and an Arabian horse.  She is intelligent and loves attention.  Little Bit is a Hackney pony and he is 15 years old.  The two have been together most of their lives.  Little Bit is friendly and always alert.  They love grass, hay and clover.  They drink lots of water and once in awhile, have an apple, carrot or peppermint treat.

Horses see, hear and can smell better than humans. Horses are very sensitive to touch and can sense when a fly has landed on any part of their body. A horses ears and head position is a strong indicator on how they are feeling.  A horse typically poops 5 to 12 times per day!

Burrito means "little donkey" in Spanish.  A donkey is able to hear the call of another donkey up to 60 miles away!  Their large ears keep them cool and can also tell a lot about their emotions. The sound a donkey makes is called a bray.